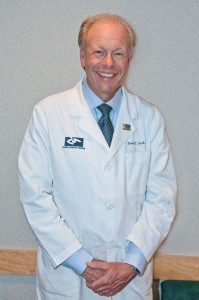 Dr. Clark is considered a leader in LASIK surgery in Michigan with extensive experience in refractive surgery. He began performing radial keratotomy in the early 90’s and was also fellowship trained and has performed automated lamellar keratoplasty (the forerunner of LASIK). Dr. Clark initiated the LASIK program at William Beaumont Hospital, Royal Oak, MI, and was Director of LASIK Training and Certification at the Beaumont Eye Institute from 1996 to 2004. He has taught several LASIK Courses and Mini-fellowships in the metropolitan area, teaching other ophthalmologists the LASIK procedure.

Dr. Clark has personally performed thousands of LASIK procedures. He believes in the procedure so much that he has had LASIK surgery performed on himself with extraordinary results.  He now performs most of his LASIK surgery with his Bausch and Lomb, Technolas 217z laser in his Brighton office. He also has significant expertise in many other refractive surgical procedures including Photorefractive Keratectomy(PRK), Laser Epithelial Keratomilieusis (LASEK) and Conductive Keratoplasty (CK).

Dr. Clark is a Board Certified Ophthalmologist and a Fellow of the American College of Surgeons. He is Chief of Ophthalmology at Huron Valley Hospital.

He is also a member of the American Society of Cataract and Refractive Surgery, the American Medical Association and the American Academy of Ophthalmology. He is currently on active staff at Huron Valley/Sinai Hospital, and St Joseph-Livingston Hospital. He is on adjunct staff at William Beaumont Hospital in Royal Oak, MI. Most of the surgery is performed in the surgical center at St Joseph-Brighton.

Dr. Clark received a B.S. degree from the University of Notre Dame and received his medical degree from Wayne State University. He performed his internship at William Beaumont Hospital and residency in Ophthalmology at Sinai Hospital of Detroit.
Dr Clark has also taken an active role in charitable work.  He has over the past 2 years traveled to Vietnam to teach the local Ophthalmolgists and perform surgery. He plans to get more involved with surgical eye expeditions in the future.